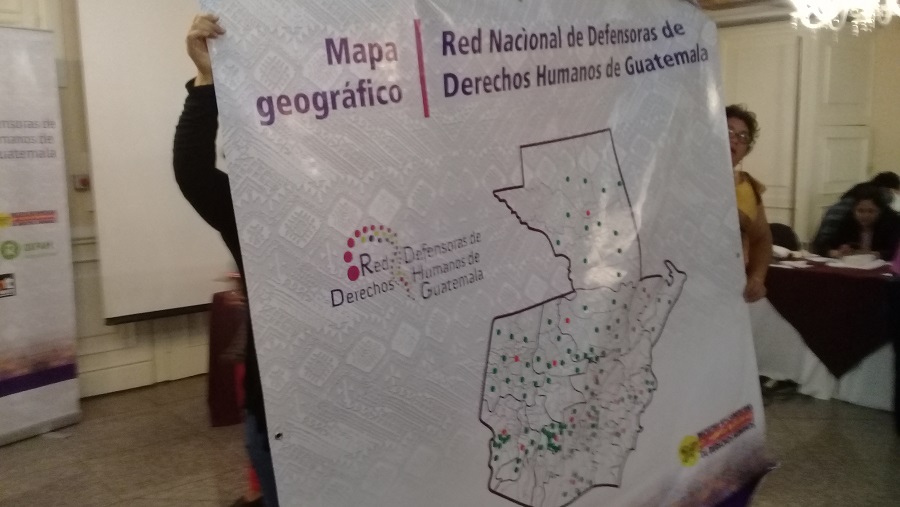 Last November, an important gathering of women defenders took place in Guatemala City, where a consensus was reached on the establishment of a new structure and guidelines of the National Network of Women Human Rights Defenders in Guatemala.

During 2017, the Network’s main objective was to strengthen the group and work on the definition of its nature, operational principles, goals, and territorial expansion. In effect, through a process of territorial mapping aimed at introducing itself, as well as meeting and forming ties with human rights organizations and defenders working in different areas, municipalities and communities, the Women Defenders Network in Guatemala has become stronger and has extended its structure to 14 of the 22 areas in the country. As a result, the Network now includes 125 organizations, most of them mixed.

In keeping with the situation in the country, characterized by the hegemony of the racist, patriarchal, neoliberal system based on extractivism, most of the defenders who make up the Network are indigenous territorial defenders and women whose work is focused on the quest for justice. It is important to emphasize that an important part of the country’s pluriculturality is represented in the Network.

It was decided that the work would be organized along six thematic lines that will establish priorities in 2018: Organization and sustainability of the Network; Communication; Protection and security for defenders; Political advocacy; Care of the life of the Network; and Self-care. With regards to its structure, the Network is made up of a National Assembly with 28 seats for defenders, two for each of the fourteen areas. A National Coordinating Group is also part of the structure: This is made up of five representatives who are responsible for the commissions covering the main thematic lines, plus two organizations who are supporting the process, UDEFEGUA and UNAMG.

We of IM-Defensoras celebrate the successful process of organization, strengthening and consolidation of the Guatemala Network. In addition to being an important step forward in guaranteeing protection for Guatemalan women defenders and the sustainability of their struggles, it is an invaluable collective learning process and opportunity to compile input and experiences that can activate and nourish other local and national processes for the empowerment and collective protection of women human rights defenders.