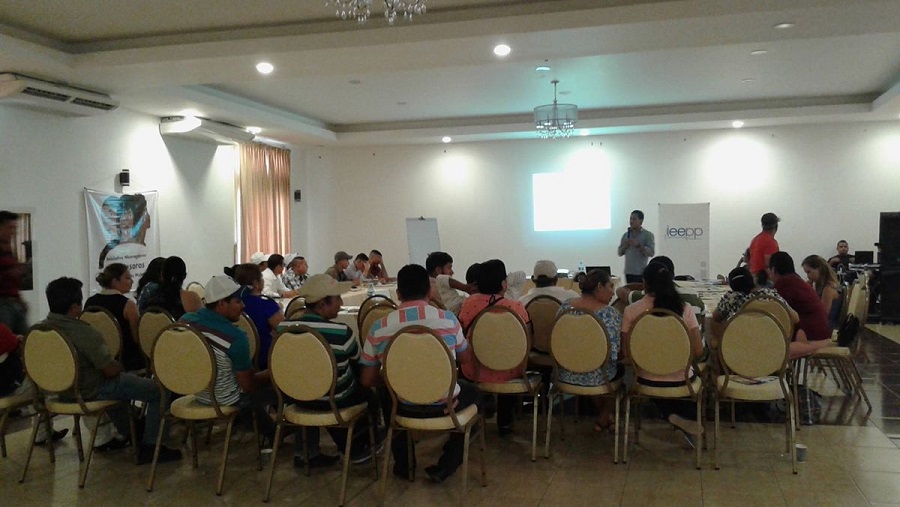 The Nicaraguan Initiative of Women Defenders – A delegation of the Nicaraguan Initiative of Women Human Rights Defenders participated in a workshop last October 23rd in Juigalpa, convoked by the Institute of Strategic Studies and Public Policy (ISSPP) and the Humboldt Center. It formed part of the activities that were complementary to the project entitled “Generating Information and Advocacy Processes for Fiscal Justice.” Members of the recently founded National Environmental Movement against Industrial Mining (MONAFI) led a workshop on Current Issues and Validation of the Route — Critique. MONAFI is made up of members of social and environmental movements in communities occuped by the mining industry, and its goal is the national defense of territories beset by the social, environmental and economic impacts caused by the mining industry. Also present in the workshop were territorial leaders of the Campesino Movement that struggles for the repeal of the concession granted to builders of the Intercoastal Canal.

In the workshop, ISSPP updated community leaders from the Boaco and Chontales areas affected by the mining industry on issues highly relevant to the political advocacy work undertaken by MONAFMI. Participants were able to develop an important part of the Route – Critique medium-term work plan along with territorial representatives from the movement, thereby accomplishing a higher degree of representation regarding the proposal.

By the same token, it was possible to achieve an interchange of work experiences among local human rights defense organizations, IN-Defensoras and some of the campesino leaders struggling aginst the canal, thereby amplifying the possibilities of strategic alliances in dealing with the socio-environmental impacts of mining.

IN-Defensoras has made a positive assessment of the participation and leadership of women territorial defenders who are resisting mining, and exhorts movement leaders to promote the participation of more women in the organization in defense of their territories.