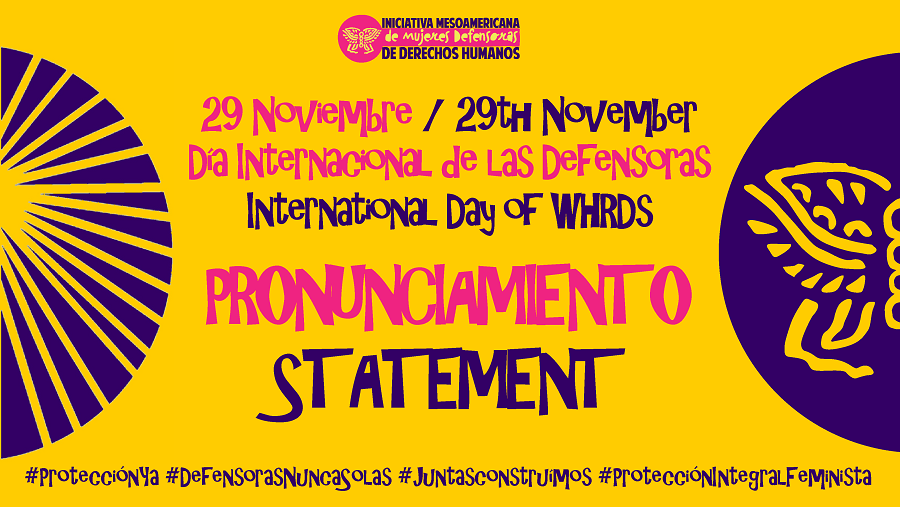 Celedonia Zalazar, Metzli Sarabia, Miriam Rodríguez, Sherly Montoya, Miroslava Breach, Laura Leonor Vásquez, Brenda Domínguez and the 41 girls of the “Our Lady of the Asumption Safe Home” have been killed since last November 29, 2016, for defending human rights in countries including Nicaragua, México, Honduras and Guatemala.

Today, November 29, 2017, on the International Day of Women Human Rights Defenders, more than a thousand defenders belonging to the Mesoamerican Initiative of Women Human Rights Defenders (IM-Defensoras), including indigenous, black, mestiza, lesbian, trans, campesina, urban, adult, and young women, diverse in every sense of the word, who have come together on the road for the defense of a dignified life for all people, raise our collective voice, first of all, to name those who are no longer with us. If they aren’t here, all of us aren’t here.

Between 2012 and 2016, at least 53 women defenders have been killed. During the same period, according to our Mesoamerican Registry of Attacks against Women Defenders, a total of 3886 attacks against women defenders have been reported. In most of them —59% per cent—the State had been responsible, thereby refusing to comply with its obligation to guarantee the security and protection of those who defend human rights. The attacks have even occurred in cases where protection measures have been granted by the Inter-American Commission on Human Rights (IACHR), or by national protection mechanisms. The State is also responsible for the fact that actors such as corporate monopolies, organized crime or religious fundamentalists continue to attack, threaten or smear women defenders.

Authoritarianism, and the closure of democratic spaces, far from changing the situation, have expanded in the majority of our countries, using violence and discrimination against women as a mechanism of social control. Women find ourselves in a position of extreme vulnerability in which our bodies and our lives are subjected to all kinds of violence: the increasingly serious phenomenon of the feminization of poverty, the plunder of lands, the pillaging of natural and community resources, worker exploitation, trafficking based on sexual exploitation, physical attacks, inequality, the imposition of roles and gender mandates, the criminalization of abortion and the right to decide about our own bodies and sexuality, rape, hate crimes, feminicides, among so many others. In at least 37% of the attacks registered against women defenders, some type of gender component has been identified, which is to say elements indicate directly or explicitly that the person is attacked for being a woman.

These types of violence that we just described also take place in the defenders’ movements, organizations and communities themselves, and in their family environments, as well. Such violence made invisible is very difficult to make public, and is overshadowed by patriarchal impunity pacts that involve dire consequences for the women defenders who suffer them. These include isolation, stigmatization and the impossibility of continuing with their work.

Faced with this situation, however, an increasing number of women have decided to raise our voices and violate the patriarchal mandate aimed at keeping us submissive, silent and locked up in our homes. We have understood that without women’s participation, there is no chance of overturning this patriarchal, racist, neoliberal, extractivist model that puts the life of the planet itself at risk.

This is why women defenders take care of each other, protect our respective struggles, and demand protection from the State.

This November 29ty, we send out a call to

The State and its respective governments:

Women defenders, organizations, movements and other actors in the sphere of human rights: