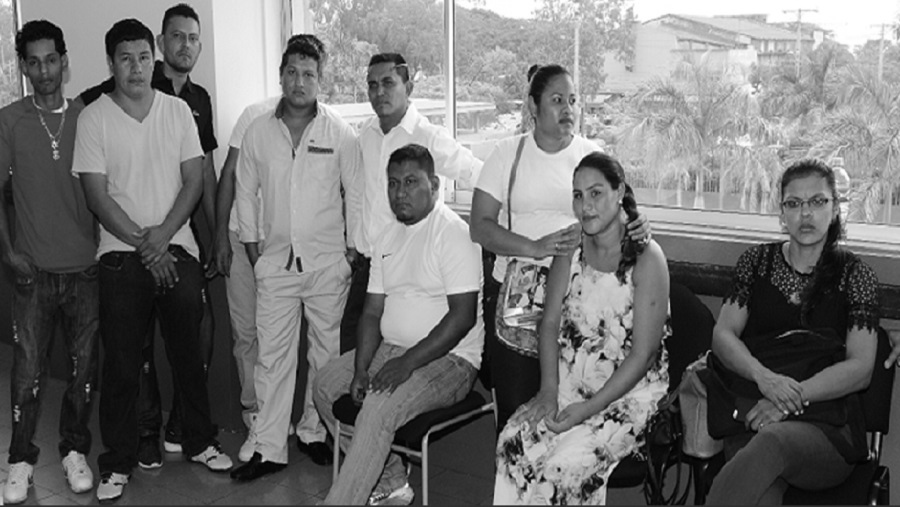 THE FACTS – On June 27, 2016 The National Police violently repressed and arrested a group of workers at the Technotex comany, who were demanding the reinstatement of union leaders and better working conditions. These included access to purified wàter for workers now obliged to consume polluted well wàter, and compliance with the Collective Bargaining Agreement. Since then, the workers have been accompanied by the María Elena Cuadra Movement of Women Workers and Unemployed Women.

On June 29th of that year, even though the lawyers of the María Elena Cuadra Movement had convinced the company to drop the charges against the workers, the National Police brought the arrested workers before a Judge, thereby initiating their prosecution for several offences, including aggravated damages against the Sae Technotex company. The Judge decreed preventive detention and two days later, rescinded related precautionary measures and instead dictated that the workers must appear in court every Friday; she also prohibited them from leaving town and from appearing at certain places or meetings.

On December 16, 2016, the official sentence was read, which condemned 10 of the persons on trial to a year in jail and established precautionary measures for the offense of Obstruction of Justice. The defendants filed an appeal, which was denied by the Appeals Court on June 29, 2017; the Court upheld each and every part of the guilty sentence.

We of IM-Defensoras charge that this is a clear case of the criminalization of workers’ protests, arbitrarily imposed by the Nicaraguan government. Even though the company desisted in pursuing the charges, the governmnent continued with the case, prosecuting the women workers and sentencing them to jail time. We demand that the case be reviewed and the workers acquitted. Defending rights is not a crime; it is a right that the government should guarantee instead of repressing defenders.

We also call on international organizations and agencies to stay abreast of this situation and show their solidarity with the criminalized women workers.