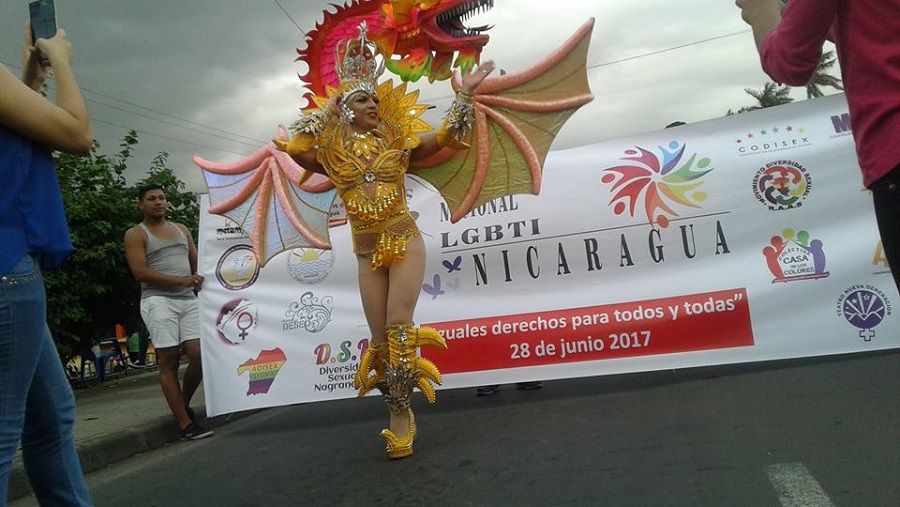 According to the Nicaraguan Initiative for Women Human Rights Defenders, the march demanding the right to be and live in public as you wish ––a parade of colors, music and enthusiasm celebrating our sexual diversity with pride–– is the fruit of many years of struggle and resistance.

On the afternoon of June 28th, Nicaragua celebrated the day for the rights of the LGBTIQ community with a successful walk through Managua of around three thousand people, magnified in activities in several different cities, including Matagalpa.

The march was organized by a combinaton of groups for sexual diversity rights, feminists and LGBTIQ activists, who created conditions for the arrival of delegations from a number of different territories.

Self-convoked persons joined in the activity on the Masaya highway in the center of Managua, celebrating with pride the right to freely express themselves. This year, the march was headed by a group of famílies who are proud of their LGBTIQ members. Women defenders spoke to several trans persons who unanimously expressed the importance of family acceptance, mainly that of their mothers.

One young transgender woman from Granada told us: “If my mother accepts me and stands by me, criticisms from the rest of the world don’t matter.” Another added: “If I have the love of my mother, nothing can stop me from struggling for my rights.” “My mother loves us all,” she said, referring to her trans friends.

Most of the non-organized participants were young, mainly homosexual or transgender persons.

After talking to other feminist and women human rights defenders, we concluded that this empowerment is an important step forward for sexual rights in terms of self-acceptance and a break with the social stigma that is so oppresive, in both the intimacy of the family and the public sphere.

It will surely be necessary to face many challenges before enjoying full rights, but the disparity has been shattered…

Other positive aspects of the march were the protection and respect of the National Police and the support of pro-government news media.

Just before getting to the point where the march was to end, rain dispersed the crowd. Most people took shelter in a gas station, which turned into a space for a fiesta and a platform for the closing ceremony.

The words of David Rocha broke through the music and the rain that poured down like a thunderclap filled with emotion, recapping the political history, which despite outstanding issues, can be celebrated today:

“On June 28, 1969 in the New York bar Stonewall Inn, the piercing voice of a Latin American trans woman called for Gay Power! With this cry, Sylvia Rivera launched a chain of violent events that would lead to freedom for the LGBTI movement to exist in the United States. The echo of this trans woman’s shout would give birth to a number of different groups that take to the streets every June 28th to celebrate pride in being different. “In Nicaragua the first event in our history that marks the struggle for our difference was the assasination of Anastasio Somoza García in 1956 by Rigoberto López Pérez. Although official historiography doesn’t describe him as being homosexual, it’s an open secret that the poet from León, Nicaragua, had a love relationship with Rafael Corrales. His act marked the zero hour of our struggle for different desires.

Read the complete speech (in Spanish)