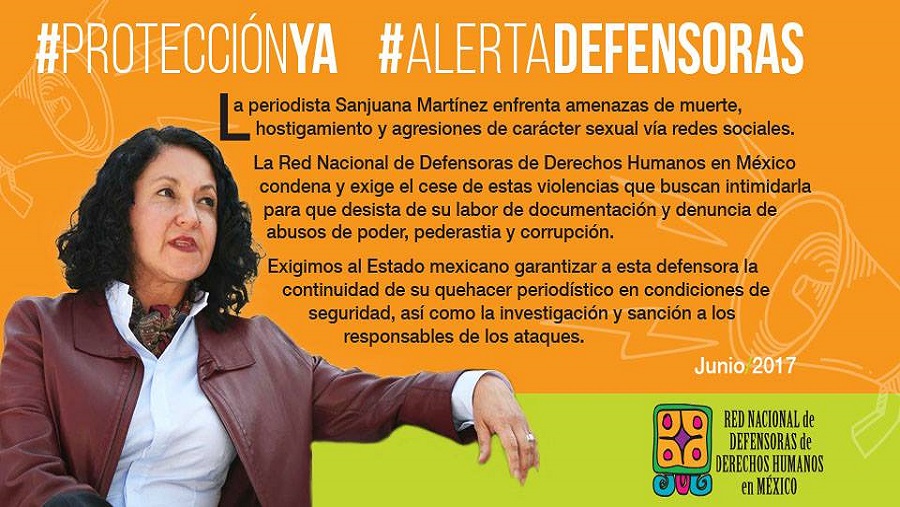 Undersecretary of Human Rights, Ministry of the Interior

Since the end of May, Sanjuana Martínez, a journalist committed to the defense of human rights and a member of the National Network of Women Human Rights Defenders in Mexico (RNDDHM), has been receiving violent messages in the social networks (Facebook and Twitter) that she uses to disseminate her journalistic work against corruption and abuses of power.

These messages, with different senders, contain death threats expressed in words and pictures, such as bullets. One image even shows the body of a woman cut in half and thrown onto a públic thoroughfare.

With such threats, Sanjuana’s aggressors try to oblige her to desist in her work, because if she doesn’t, they warn, “they’ll pick her up off the street and fill her full of lead.” One also tells her to be careful because “my commando is already looking for you to hang you from a bridge.” And another wrote, “I live with the hope of waking up to the news that they decapitated @SanjuanaMtz: Where are the drug cartels when we need them?”

Other forms of violence that Sanjuana Martínez is subjected to in the social networks include insults as a means of harassment. Some are notable for their sexual connotations, as when she receives images of penises (more and more frequently) or threats of rape.

The 222 women defenders and journalists organized in the RNDDHM repudiate these acts. We are concerned about the death threats against Sanjuana Martínez, particularly because they are occurring in the context of the continuity and escalation of violence against human rights defenders in Mexico (fed by institutional impunity and permissiveness of such acts), In 2017 alone, at least four murders of women defenders and journalists have been perpetrated, including that of Miroslava Breach, in Chihuahua.

We also want to emphasize that Sanjuana’s case is evidence of what we in the Defender Network call the component of gender discrimination in the attacks. By the same token, it is a clear example of the way in which the violence experienced by women defenders is different from that faced by male defenders. Its impacts take on special relevance due to the sexual nature of the violence.

Given that the journalistic investigations by Sanjuana Martínez contribute documentation to five recent crimes of State (Tlatlaya, Ayotzinapa, Apatzingán, Tanhuato and Nochixtlán), this is not the first time that the communicator has been subjected to violence as a result of her work.

For years, she has been subjected to searches of her residence and acts of judicial prosecution. One well-known exemple is the lawsuit for moral damage brought against her by the PRD politician Jesús Ortega, which gave rise to a legal process that went on for four years. Finally, in violation of her freedom of expression, she was required to pay damages in the case. Likewise, at the end of the year 2015, the defender experienced a situation comparable to the current one: death threats and the reception of images, via Twitter, with sexual connotations, and threats of rape.

We, of the RNDDHM strongly condemn these acts of violence. We are convinced that their aim is to frighten Sanjuana Martínez in order to put an end to her journalistic work in support of human rights, especially now that she is conducting an investigation into crimes of State committed by security forces.

Accordingly, the 222 women defenders and journalists organized in this Network demand that the Mexican government do the following: