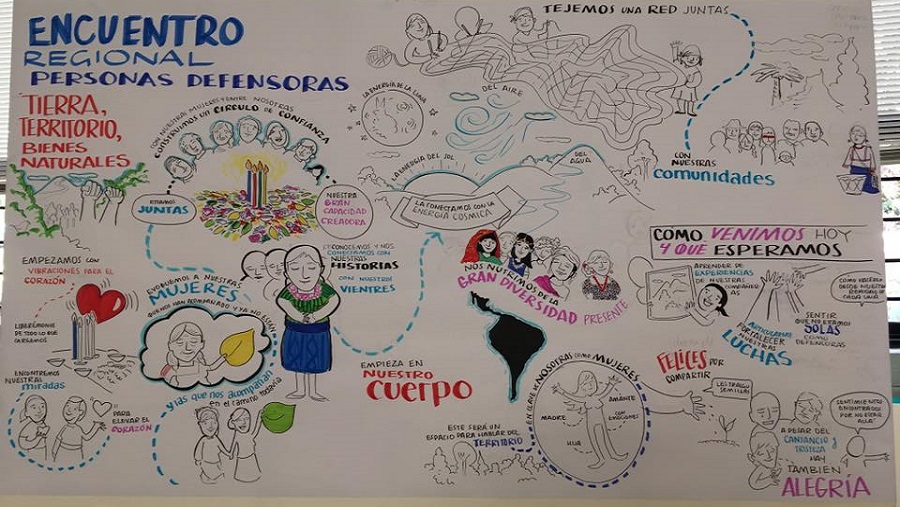 Declaration of organizations participating in the Latin American Gathering of Defenders and Authorities of the Original Peoples and Territories of Latin America. 1

Defenders and authorities of the original peoples and territories of Latin America came together in Mexico City to share and analyze our realities, struggles, challenges and hopes.

With indignation, we have seen the advance of a neoliberal, extractivist model that plunders natural assets, invades territories and destroys life in all its forms. This is a system based on a new colonialism that generates new forms of slavery among populations inhabiting the territories devastated by insatiable greed. It is a system that considers women’s bodies as other territories to occupy and conquer as spoils of war. Its impacts are intensely experienced, particularly by the indigenous, rural, black, Afro-descendant, rural-mestiza and quilombo populations.

With sorrow, we see the way in which the waters, forests and lands of our region are deteriorating, and the way those of us who defend these common assets are criminalized, prosecuted and stigmatized. With deep concern, we watch the rapid process of the re-concentration of land and wealth in increasingly fewer hands, a process that is generating monstrous and dangerous inequalities on our continent.

We live in surroundings of impunity, corruption, censorship, consciences bought and sold, militarization, hired gunmen, murders, disappearances and imprisonment. We live in narco-states where life is worth nothing and laws are used to repress those of us who raise our voices and work to make these problems disappear.

The formal powers, including governments and institutions, along with the powers that be ––big capital, transnationals, drug traffickers, conservative churches and news media–– are fortifying this neoliberal, patriarchal model that has made money the god that must be served at the cost of life itself, sweeping away civil and political rights, cultural rights, environmental rights, and all the rights won during so many years by our peoples.

We do not accept the manipulation by these powers of the history of our peoples, nor their discourse aimed at making us believe that the destruction of our territories and the plunder of our natural resources will bring development, progress and well-being.

We consider it outrageous that in the 21st century, when there is an increasingly wider recognition by the international community of the rights of every human being, that defenders of the water, forests, lands and territories continue to be imprisoned and killed.

Plunder and injustice, along with the abuse of power, have left enormous scars and grief yet to be resolved in our peoples and communities. We have seen the social fabric of the communities torn and the normative, cultural and historical systems weakened among the indigenous, Afro-descendant peoples and their territories. We have seen municipal and territorial autonomy disappear. We have seen a rise in feminicides, sexual violence, the trafficking of women’s bodies, the fragmentation of families, the forced displacement of populations that must leave behind their homes, their loved ones, their memories. We have seen many of our people live in uncertainty and anxiety, with the daily fear of losing their lives.

Today, tomorrow and the day after tomorrow, in each of our countries, in each territory of Our America, a defender, a person, will be killed, jailed, disappeared, tortured, threatened, raped or exiled for defending rights established in the Universal Declaration of Human Rights.

In the face of so much death, human rights defenders, particularly those who defend the environment and territories, are forming strategic alliances that will be long-lasting and allow us to better protect ourselves and strengthen our organization, resistance and political action.

We call on other peoples, scholars, progressive intellectuals, organizations and social, popular and community movements to support these struggles with decision and passion, and to refuse to allow the advance of this patriarchal, neoliberal, model that preys on our natural assets, because if it does advance, it will end up destroying all humanity and life itself.

We want to tell you that with an enormous effort, we’re still alive. And we feel happy about maintaining our commitment to struggle for life. For the life of all forms of life. For freedom, justice and the permanence of memory. For a better future for all. For the planet, our common home.

In Mexico City on the first day of the month of June,

Parliament of the Mapuche People of Río Negro – Argentina

National Network of Women in Defense of Mother Earth – Bolivia

Honduran Center for the Promotion of Community Development (CEHPRODEC) – Honduras

Popular Assembly of the People of Juchitan (APPJ) – Mexico

Movement in Defense of the Río San Pedro Libre – Mexico

Movement in Defense of Life and Territory (Modevite) Chiapas – México

‘The Time Has Come for People’s Action’ Segovian Movement– Nicaragua

National Coordination of the Indigenous Women of Panama (CONAMUIP)– Panama

Shiwilu People of the Amazon – Peru