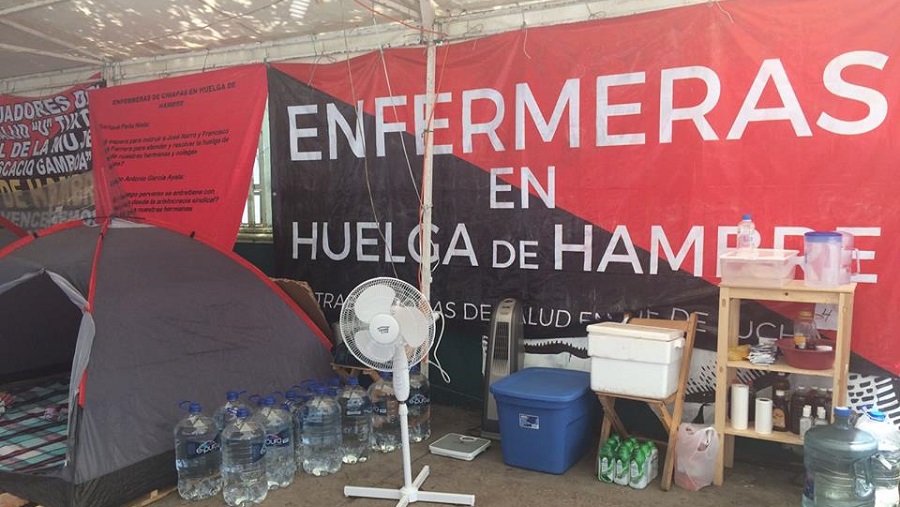 We are witness to the critical state of health of the six nurses (Emma Escobar López, María Cielo Gramajo Cundapí, Nelly Ivonne Castillo Escobar, Rosy Eroyda Pérez Lázaro, Claudia Lizeth Martínez Camacho, and Verónica Zenteno Pérez) who have suspended food consumption for 21 days. They are experiencing severe dehydration and at this point, their organisms are beginning to reject the oral intake of líquids.

Last May 17th, it was made public that one of the hunger strikers, 40-year-old Gabriela Mayanin López Cruz, found it necessary to suspend her protest after suffering a severe dehydration crisis. She continues to be hospitalized in intensive care, with her liver function at risk.

Despite the orgànic damage done to themselves by their protest, the six nurses, four of whom participated in the first hunger strike from April 3rd to 14th, maintain their strong convictions.

Their demands are basic: A suficient supply of goods and medicines in the hospitals and medical attention centers in Chiapas. (They say the deficiency is so severe that surgery has been suspended for lack of anasthesia.) Payment by local government to insurance and loan companies of debts unpaid for over five years, creating a situation that affects the stability of the workers and their famílies. The nurses are also demanding the immediate, unconditional reinstatement of 15 employees (12 women and 3 men), who were fired for denouncing such irregularities.

The RNDDHM, made up of 222 women defenders and journalists, hereby stands in solidarity with the hunger-striking nurses and demands full and immediate compliance by the government of Chiapas with their demands.