Women defending their territories; voices of resistance in Nicaragua 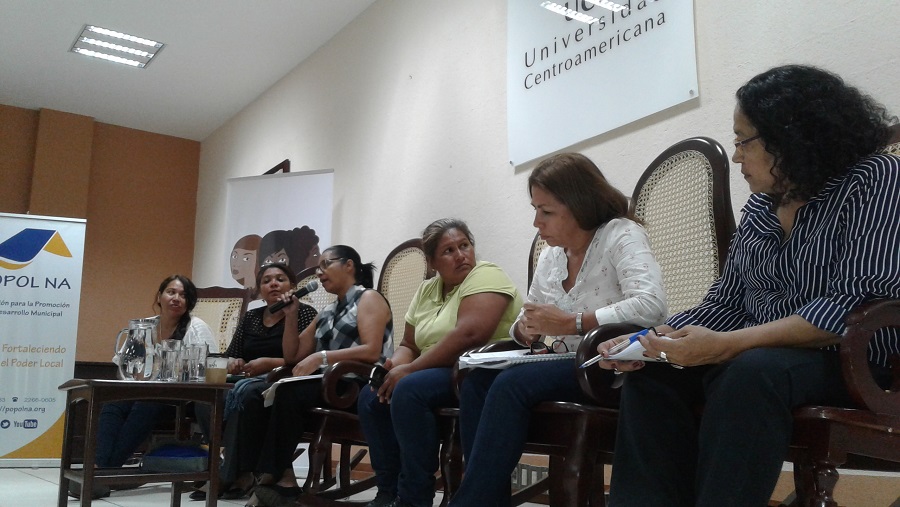 Nicaraguan Intiative of Women Human Rights Defenders – In an auditorium filled to overflowing, women human rights defenders Dolene Miller of the Southern Caribbean region, Lottie Cunningham of the Northern Caribbean, Haydée Castillo of the Segovias and Francisca Ramírez of the Canal Zone gave spellbinding reports of the social problems now engulfing Nicaragua in the areas of territorial defense, women’s perspectives and the exercise of human rights, in the public forum entitled “Women Defending their Territories” held on the afternoon of April 19th in the Central American University in Managua.

The activity organized by the Nicaraguan Initiative of Women Human Rights Defenders, IN-Defensoras, was able to break the siege of state media control that hides the reality experienced outside the capital city, as women’s voices from their respective territories spoke of a positive and comprehensive view of development. With objective arguments, they exposed the way in which the government evades its responsibilities and, instead of being a guarantor of the well-being of the people and the sovereignty of the country, is part of the power structure that oppresses the people. Dolene Miller began by recapitulating the cultural and educational challenges that have led the coastal population to a greater understanding and appropriation of the Autonomy Law and the way in which it is related to poverty and to the process of territorial demarcation that is a right of indigenous peoples. She recalled a United Nations report on development that named 12 of the 20 poorest municipalities in the country on the Caribbean Coast. She also pointed out that people have come to understand that to speak of rights is to speak of politics, and that politics and rights are a matter of civic awareness.

One of the contradictions identified in Dolene’s territory is the fact that the laws say you have rights, but when people demand the application of the laws, they run into authorities that see their efforts as a form of aggression.

“Who do we offend if we demand a right? …We don’t find a sounding board. All we find are closed doors.”

“ We need to learn from each other. To use the Constitution as a bridge that connects us. The State oppresses us equally, yet we on the bottom fight over who has more rights. When the people gain consciousness, nobody can stop us.” / Dolene Miller.

Lottie Cunningham raised her voice on behalf of indigenous women and youth, traditional authorities, and boys and girls crying out for peace in the territory where she lives. She explained that for them, territory is fundamental to be able to live, and that territory is also spiritual. Moreover, she referred to the recognition of communal property of indigenous peoples in national and international laws.

Lottie is aware that the Caribbean Coast has always been abandoned by the government in power, and that with the beginning of the sanitation process, the situation has gotten worse due to the criminalization of those who defend their right. At first, in 2014, government officials received her people, but the relationship deteriorated as they exhausted all national options and were obliged to seek international relief in a process where the government has also been absent. Right now, all of the communities in resistance are experiencing a crisis of violence that endangers all of their most basic rights.

Lottie called attention to the fact that the Caribbean territory is part of Nicaragua and stressed the need for solidarity with the struggle of her people. She also urged the universities, the youth and the news media to become more familiar with what is going on in the region. Instead of reporting solely from Managua, she called on them to go to the communities to investigate the situation and give it coverage.

“We have always petitioned the government of Nicaragua to assume its responsibility and comply with international mechanisms. Nicaragua has ratified the ILO Convention 169 that establishes the collective rights of indigenous peoples and has ratified the Universal Declaration of Human Rights. We need to see Nicaragua comply with its obligations and take concrete action to mitigate the risks in the 12 Caribbean communities. It should also comply with the precautionary measures established by the Inter-American Court. Nicaraguan officials have been absent during the IACHR hearings and have left us there alone. We need to see the government of Nicaragua open its doors to dialogue in order to find a solution to this problem.” / Lottie Cunningham

In her remarks, Haydee Castillo denounced the situation of abandonment in rural areas and the centralization that exists in the country:

“… Yesterday, we traveled through Jícaro and found that in some places the fires weren’t lit and people were only there part time. ¿What’s happening here? We see the way the way the ecomomy is being handled. The power centers are in Managua. Everything happens in Managua. That’s where decisions are made because municipal autonomy has disappeared.”

“This is a system that has failed, because Managua is not Nicaragua. Managua needs us and we need Managua because we’re all part of the same country. We are all Nicaragua.” / Haydee Castillo

Haydee also spoke about the history of social movements and their participation in matters that affect local development. She said that here, too, the current government has closed its doors and that it is increasingly difficult to engage in any kind of dialogue:

“…If you go out to protest anything or propose something or criticize something, the first thing you see is that they’re taking our pictures or videotaping us. They’ve taken us off buses, and there are comrades who have been taken to jail just for going to a march against violence. Then, too, there’s the issue of impunity. In the face of all this, one asks, What’s happening? Where can I go?

“We don’t oppose development, but it can’t be the kind of development that does away with our way of life.” / Haydee Castillo

Francisca Ramírez used firm, simple words, as she usually does, to speak of the implications for the entire country of the Law 840, which grants a concession for the Interoceanic Canal Nicaragua:

“We are a diverse campesino movement whose people come from different places in defense of our land, water and sovereignty, and we’re here with you today in defense of your beans, your cuajaditas… We’ve been struggling against this shameful Law 840 for three years.”

“Many people say, the struggle of Doña Chica, but I say it’s not just my struggle. It has to be everyone’s struggle because it affects us all.

… Today we have a lot to be thankful for because I don’t think we ever thought much about the political Constitution, but now we see that this Constitution gives us the right to demonstrate, so we’ve organized 87 demonstrations.” / Francisca Ramírez

The panelists also stressed the importance of the forum, especially since it’s not easy these days to find such spaces for events in Nicaragua, especially those that are so well attended.

During the period of audience participation, one issue was raised that is also a matter of concern for women defenders: the delay in justice in the case of Vilma Trujillo, who was burned to death by religious leaders in a community on the Caribbean Coast. The trial of those accused was reprogrammed for the second time based on the argument of a lack of witnesses, a delay that highlights the lack of compliance with the government’s obligations to its citizens, and particularly to women.

Panelists and participants also denounced the closure of the radio program Onda Local, due to its militant coverage and accompaniment of people involved in different problems experienced in local areas.

Here we have some of the impressions shared by those attending the forum on behalf of social networks:

“ This forum was an opportunity to get together and get to know each other and realize that we’re all part of the same struggle nationally. “The first territories that we have to defend are our own bodies,” Haydee Castillo reminded us. This is a call to the entire Nicaraguan society, especially to students and young people, to leave our fear and self-censorship behind and act now, so we won’t be sorry later on.

“Yesterday at the Forum there were four women panelists, but now there are a whole bunch of us!” We, of the Matagalpa Women’s Network steadfastly assure you that neither women nor the land are territories to be conquered!”/ Red de Mujeres de Matagalpa

“The thing that impressed me most about the Forum “Women Defending their Territories” was the deep conviction, strength and clarity with which women have explained the structural causes of the problems analyzed. The comrades from the Atlantic Coast recognize that despite the patience shown for decades by indigenous and Afro-descendant peoples, all the governments in the Pacific region –not the national governments– have deceived them, manipulated their demands for autonomy and bought off regional leaders.

Another thing that impressed me was the absence of certain intellectuals and politicians who say they’re very concerned about the government’s violations of human rights. Could it be that they’re not interested in what women have to say?” / María Teresa Blandón