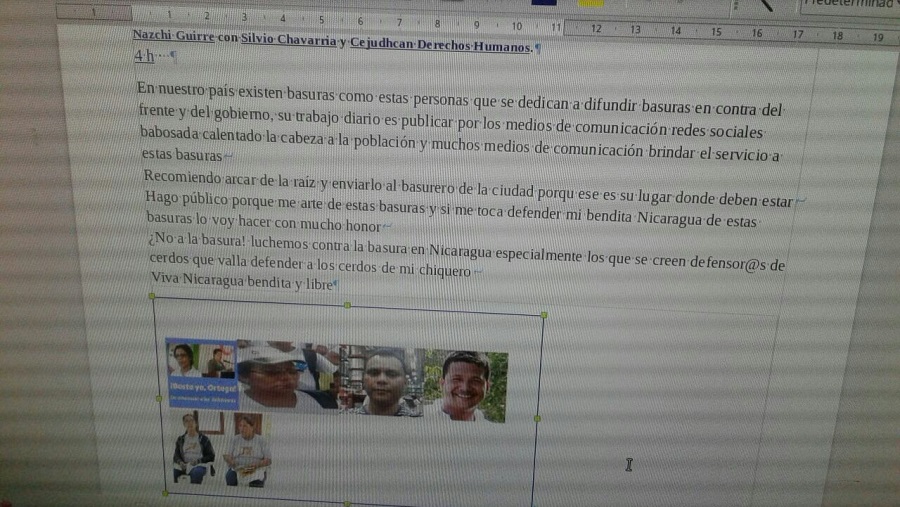 Organizations
Center for Justice and Human Rights on the Atlantic Coast of Nicaragua (CEJUDHCAN);
Nicaraguan Center for Human Rights (CENIDH); Council for the Defense of Land, Lake, and Sovereignty

Activity
The right to defend human rights, the rights of indigenous and Afro-descendant peoples to territorial and environmental defense

THE FACTS – On Friday, March 17, comrades in the Center for Justice and Human Rights on the Atlantic Coast of Nicaragua (CEJUDHCAN) received a message containing personal attacks, outrageous accusations and serious threats against human rights defenders identified in an image sent along with the message.

We are especially concerned that these defenders include CEJUDHCAN founder Lottie Cunningham; CENIDH President Vilma Nuñez; and the leader of the Council in Defense of the Land, Lakes and Sovereignty, Francisca Ramírez, who have recently been targets of similar attacks. We have published information about the cases of Lottie Cunningham and Vilma Nuñez, respectively,  in our #WHRDAlerts of March 8th and 9th, 2017, and the case of Francisca Ramírez on December 6, 2016. Juana Bilbano, the Director of CEJUDHCAN, also received threats after having been granted precautionary measures by the Inter-American Commission on Human Rights (IACHR) due to previous threats.

The escalation and intensification of this kind of attacks can only be seen as a direct threat that places the lives of women human rights defenders at risk and reflects a decision to hamper their work and impede their right to defend human rights.

We, of IM-Defensoras repudiate these attacks and reiterate our demand that the government of Nicaragua guarantee the safety and security of the defenders and their right to defend rights; we hold the government responsible for anything that might happen to them.

In the same vein, we call on the international community to send support and solidarity to these defenders and their organizations and to stay tuned to the situation.