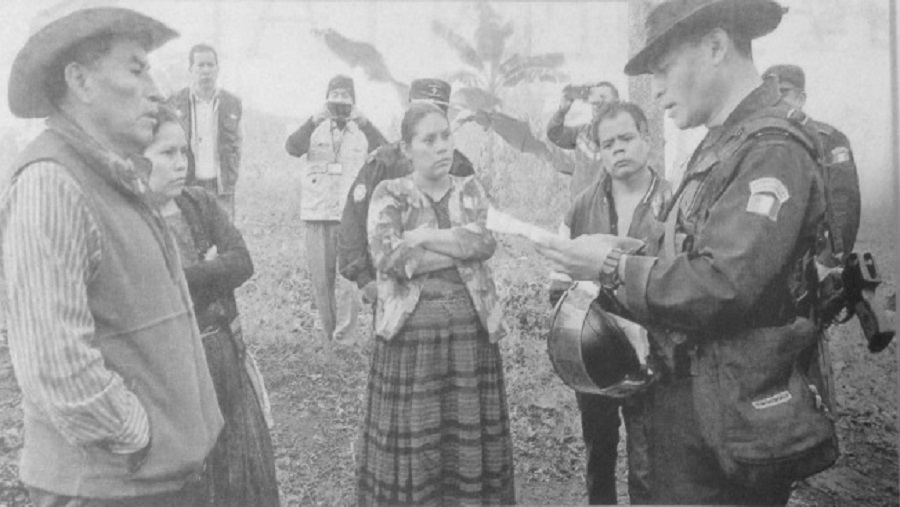 On Thursday morning, January 5th, a contingent of the National Civilian Police (PNC) along with members of the Presidential Human Rights Commission (COPREDEH) and the Public Prosecutor’s Office, evicted more than 20 families from the Santa Inés plantation in Santa Cruz, Alta Verapaz. During the eviction, defenders María Elena Col Rey and Albina Chocooj Col, who is pregnant, were arrested on charges of “aggravated land encroachment,” together with the community authorities Cristobal Mo Ti and Crisanto Tul Cojoc.

In the year 2000, four years after Guatemala’s Peace Accords went into effect, a group of Poqomchi’ Mayan famílies, who were to leave these lands, returned to recover them, exercising their right to food and housing. Since then, the Santa Inés community has been subjected to four evictions.

The Verapaz Union of Campesino Organizations (UVOC), has taken this land conflict to a discussion table for talks with authorities of the District Government, Ministry of Agrarian Affairs (SAA), Land Fund, Land Information Registry (RIC), Office of the Human Rights Ombudsman (PDH) and the affected community.
We, of IM-Defensoras, urge the Guatemalan government to immediately free the four people who are under arrest, and to guarantee their security, as well as the security of all the famílies who are defending their legitimate right to the land.

Likewise, we call on all International human rights organizations and agencies to stay abreast of the situation.