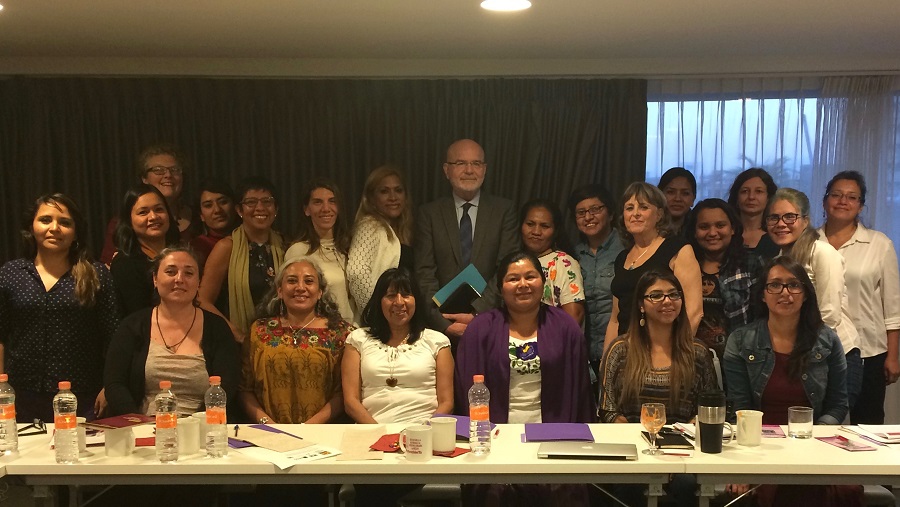 PRESS STATEMENT  of the National Network

“The outstanding groups of women human rights defenders that I’ve met here in Mexico remind us that women are frequently in the forefront of the battles for human rights even though their work may still be invisible.”

In specifically designated spaces, defenders from 11 statesiii spoke of the need to highlight gender differences and inequalities as a priority in achieving equality, enjoyment and protection of the human rights of defenders, especially in a global context in which a patriarchal vision is enforced. This perspective discredits the voices of women; invisibilizes our struggles and contributions; and violates our rights, bodies, freedom, aspirations and needs.

In view of the above, we shared both our endeavor and our diagnosis with the Rapporteur regarding the attacks we’re experiencing and their impact, as well as the strengths and challenges that we’ve identified for the creation and strengthening of citizen protection networks.

Our meetings with the expert were an opportunity to call his attention to the Registry of attacks against women defenders and journalists, administered by the RNDDHM and the Mesoamerican Initiative of Women Human Rights Defenders. According to the Registry, from 2010 to 2016, 41 women human rights defenders (11 of whom were journalists) were killed due to their defense workiv. This data was included in the Mission Closure Report submitted by the UN representative.

In the same vein, we told the Rapporteur that there are four attacks on women defenders in Mexico every week, and that their frequency is increasing. We also noted that our main aggressors are public officials, among them police officers, and that the most recurrent attacks we face are intimidation and smear campaigns using macho, sexist language. Furthermore, we reported cases of torture, sexual and workplace harassment, threats against our children, and femicides.

In his report, the Rapporteur echoed some of our basic concerns as follows: “Most women defenders are at risk not only due to their work but to their gender”; “they are likely to suffer sexual violence, threats on social networks, or smear campaigns based on gender stereotypes”; “due to the fact that they challenge the patriarchy and misogyny, women defenders may also face violence and discrimination in their own families and communities, given that their defense work is often seen as less important or at variance with the role assigned to them socially and culturally.” With regards to this last point, Michel Forst calls on the civil society to “deal with discrimination against women and LGBTI defenders in their own movements.”

The UN representative also stressed the fact that in social networks, women defenders are the target of specific attacks including messages that incite violence against us or urge “rape as punishment.” Moreover, he points out that we face smear campaigns with a heavy gender component, including insults or references to us as prostitutes or women without values or morality.

We who make up the RNDDHM appreciate the Rapporteur’s visit, his sensitivity and interest in incorporating a gender perspective in his work, and his willingness to meet with women defenders and journalists in spaces specifically designated for the analysis of our situation.

And finally, we are grateful for the emphasis he has placed on our efforts in defender networks, pointing out that “they are a key factor in protection”, and for his acknowledgement of our work: “I want to publicly acknowledge and support the work led by networks, such as the National Network of Women Human Rights Defenders, which has been crucial in helping women break the cycle of violence and stigmatization and has offered many opportunities for self-protection and capacity building.”

We urge the Mexican government to comply with the package of recommendations that the Rapporteur made in his Mission Closure Report, particularly the following: