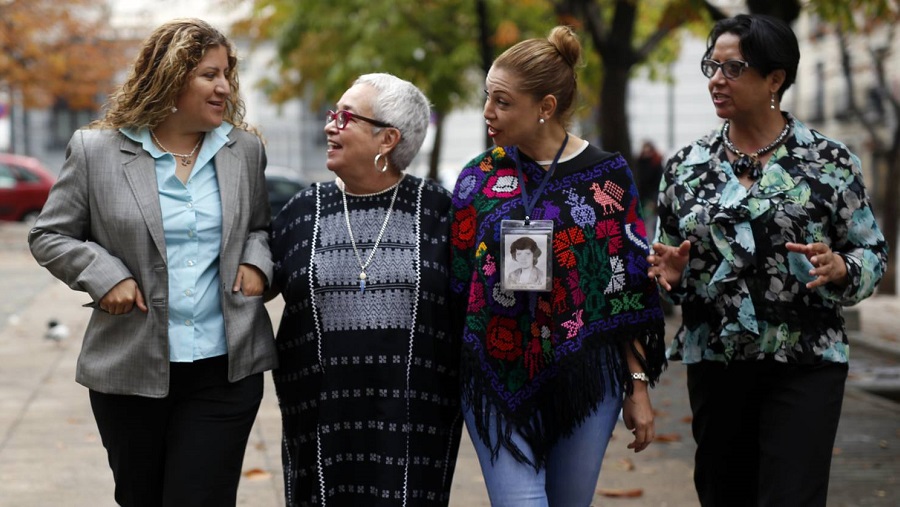 Last October 17th and 18th in Barcelona and Madrid, respectively, IM-Defensoras, together with the PBI-Spanish State, Front Line Defenders, Calala Women’s Fund and JASS Mesoamérica, co-organized the International Seminar entitled Weaving Webs for the Protection of Women Human Rights Defenders, in the framework of protection mechanisms such as Women, Peace and Security.

At this seminar, women human rights defenders belonging to IM-Defensoras, Journalism and Democracy in Honduras, Women’s Roundtable Network of Ciudad Juárez and the Nydia Erika Bautista Foundation of Colombia, were accompanied by Alda Facio, President of the United Nations Working Group on Discrimination against Women. They analyzed the situation of the infringement of women’s rights and shared their own on-the- ground experiences and their political and gender analyses of the corrent context of violence and attacks.

The Seminar began in Barcelona with a brief homage to Gladys Lanza, including the screening of our video “Thank you, Gladys”. On the morning of October 19th, our comrades in the national networks of Mexico and Honduras, along with other participants in the International Seminar on the Protection of Women Defenders in Conflict Areas, were received by the General Assembly of Madrid and the Congress of Deputies of the Spanish State, where they met with members elect of the Parliament to deal with issues including international cooperation and the protection of women defenders.