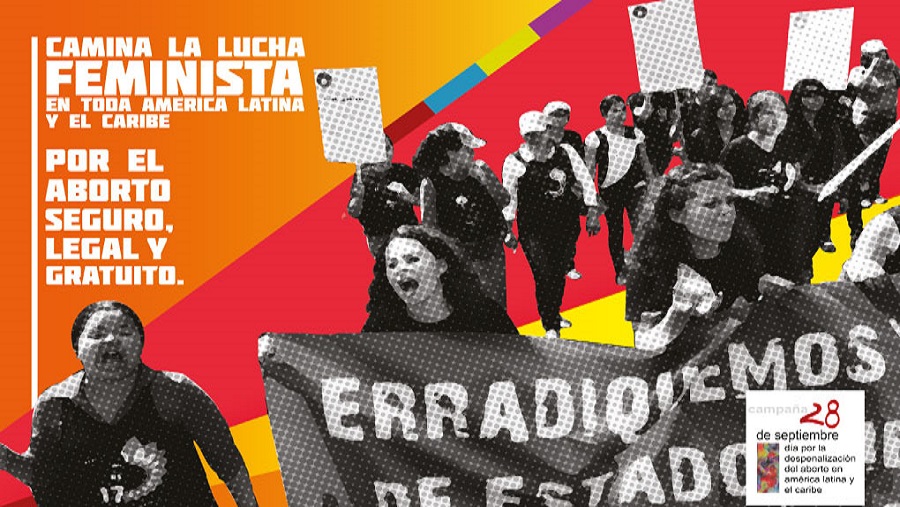 The Campaign was launched at the Fifth Latin American and Caribbean Feminist Gathering held in San Bernardo, Argentina, in November 1990, with the goal of creating conditions to gain access to safe, legal abortions with high-quality care in all the countries of Latin America and the Caribbean.

At 9:30 am on Thursday, September 28, 2016, Patricia Orozco, Celia Contreras, Duyerling Ríos, Maria Jesus Tenorio, Jessica Hernandez, Luisa Molina and Abixael Mogollon went to the southwest entrance of the National Assembly to engage in a protest action as part of the International Day for the Decriminalization of Abortion in Latin America and the Caribbean.

The defenders highlighted their demands with a banner and red paint sprayed on the ground outside the entrance to the building. A man in plainclothes parked across from them, made several phone calls, and then left. When the activists drove by 10 minutes later to see the impact of their work, they found ten uniformed policemen observing it. The same man who had made the calls ordered them to stop, flashing a credential that identified him as a police officer. They were unable to take down his data because he was too far away.

Around 30 policemen then arrived on motorcycles and in trucks. One of them ordered the driver to show her identification card and the registration papers of her vehicle. An agent then told the six women to get out of the vehicle and to get into a police van that would take them to District 1 of the National Police Department. When the driver complained, an officer got into the vehicle and went with the defenders to District 1, while young Abixael Mogoyón was handcuffed and required to ride in a police van.

When they got to the district office, the women were ordered to turn over the keys to their vehicle, go into an office and give their names. They refused to do so until the handcuffs were taken off of Abixael. The defenders were in the District 1 parking lot for about an hour, making calls to denounce their situation. While they were giving the names of the detainees to journalist Luis Galeano of Radio Universidad, an agent copied them down. After an hour, an officer finally came out and told them they could go. Orders from higher up, he said.

We of IM-Defensoras condemn this recent attack against Nicaraguan defenders of the rights of women, and demand that the government of Nicaragua put an end to the harassment, repression and criminalization of the women’s right to defend their rights.