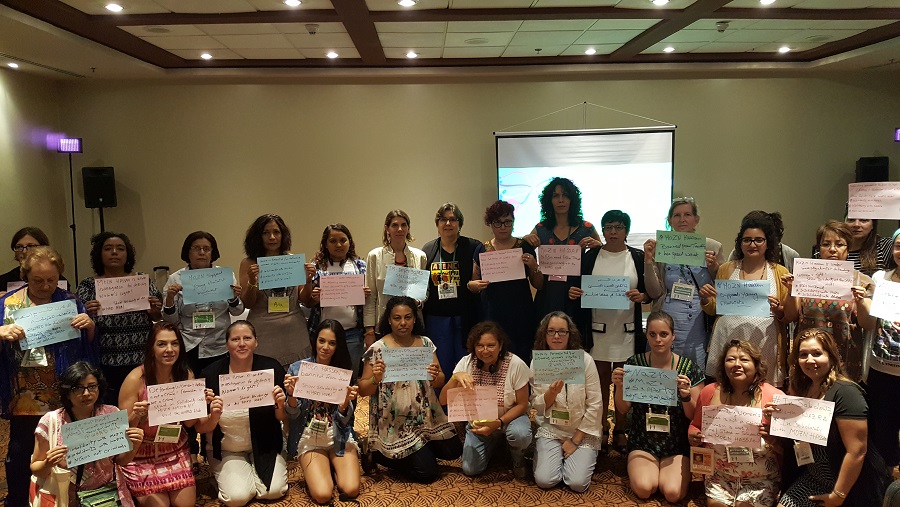 On September 8, the 13th International AWID Forum, “Feminist Futures: Building collective power for rights and justice”, was kicked off in Costa do Sauípe, Bahía, Brasil. Many members of IM-Defensoras participated, including several national networks and organizations that make up our Driving Group. A series of events took place with the direct participation of IM-Defensoras or groups closely related to the work of Mesoamerican women defenders. (See the agenda of IM-Defensoras at the #AWIDForum). Myrna Cunningham, President of the AWID Board of Directors, and Lydia Alpízar, AWID’s Executive Director and member of the IM-Defensoras Driving Group, inaugurated the Forum with rousing speeches. Lydia is stepping down after ten years of service as Executive Director, and her remarks were especially moving. We congratulate her and express our heartfelt gratitude for her invaluable contributions, wishing her the very best in this new stage of her life. Cindy Clark and Hakima Abbas will be the new Executive Co-Directors of the organization. The inauguration of the Forum ended with an outcry against the coup d’etat perpetrated in Brazil against elected President Dilma Rousseff. Our comrade Miriam Mirandaa was among the notable speakers from different continents who participated in the inaugural ceremony. A member of OFRANEH and the National Network of Women Human Rights Defenders in Honduras, Miriam warned of the racist polítics of neoliberal capitalist plunder, underscoring the role of coup d’etats like the one perpetrated in Honduras in 2009. On Thursday afternoon, one of the most moving activities of the Forum took place: a tribute to the women human rights defenders who are no longer with us. They were remembered and celebrated, and profund gratitude was expressed for their legacy. On Saturday, September 10, two events were organized by IM-Defensoras: A session on “Solidarity bonds and actions among women human rights defenders” and the presentation of “La Serena”, a house of healing and self-care. On Saturday afternoon, IM-Defensoras and the National Network of Women Human Rights Defenders in Honduras held a ceremony in homage to Berta Cáceres and in support of women defenders organized in COPINH. On Sunday 11, after four intense days, the Forum came to an end in a stirring plenary session, with the participation of our comrade Marusia López, a member of JASS and IM-Defensoras.