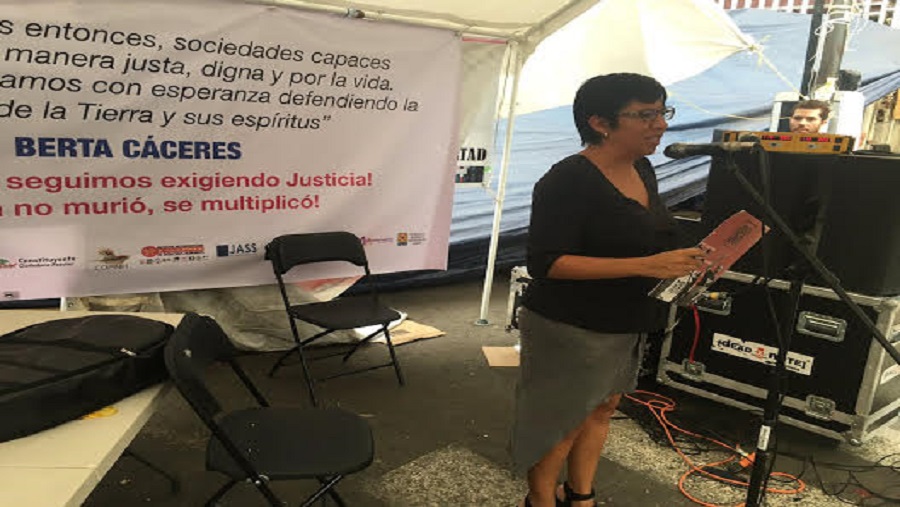 Six months have gone by since our comrade Berta Cáceres was killed in Honduras, during which time none of the demands for justice or the cancellation of the Agua Zarca plant have been met. We, of IM-Defensoras, have taken up COPINH’s call for a new round of global actions to remember Berta’s legacy, denounce the impunity surrounding the crime of her murder, and demand the immediate and definitive closure of the Agua Zarta proyect.

Making the most of the presence of Berta’s daughter, Berta Zúñiga, in Mexico, we called for a series of joint actions with the National Network in Mexico and oher national and regional organizations, which took place between September 2 and 7.

The first was a cultural-artistic event held on September 2, at the Ciudadela in Mexico City, with the participation of Bertha Zúñiga and several different artists to whom we are grateful for their commitment and solidarity. At this event, our Co-Coordinator Orfe Castillo read the OPEN LETTER issued by IM-Defenders and several different national networks for the occasion. Throughout the series of events, the social networks were full of messages of solidarity with Berta Cáceres and the Lenca people; these came from different countries with hashtags like #6MonthsWithoutJustice or #JusticeForBertaCáceres. At the same time, demonstrations and públic gatherings were held in Honduras, organized by COPINH and the National Network of Women Human Rights Defenders, and in any number of cities on the planet.

SIGN ONLINE TO DEMAND Justice For Berta and the Lenca people: Cancel the Agua Zarca Project