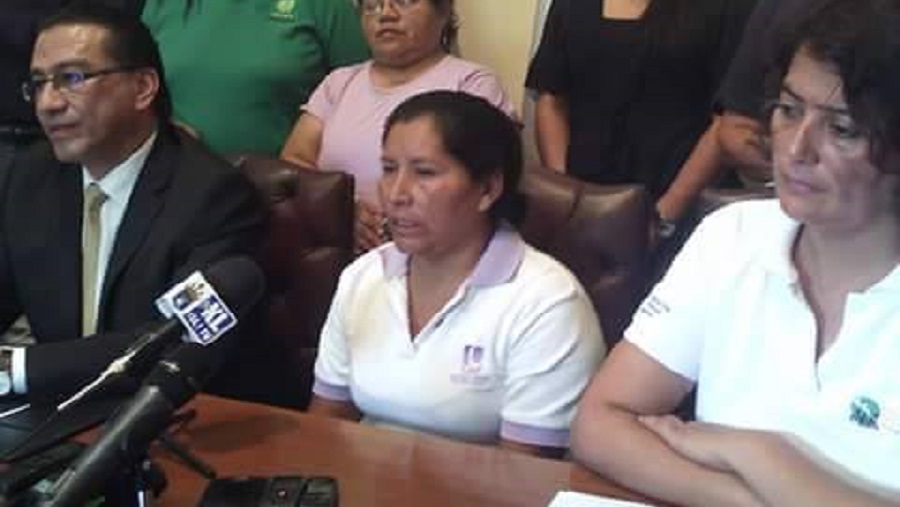 The verdict should be seen as a legal precedent in other cases involving the criminalization of women human rights defenders in Mesoamerica.

Mesoamerica, August 29, 2016 – The 750 women human rights defenders in El Salvador, Guatemala, Honduras, México and Nicaragua, who make up the Mesoamerican Initiative of Women Human Rights Defenders (IM-Defensoras), hereby express our satisfaction with the recent sentence exonerating Salvadoran rights defender Sonia Sánchez of the charges of DEFAMATION and SLANDER brought against her by INVERSIONES ROBLE S.A. de C.V, with the aim of criminalizing and limiting her work in defense of the environment.

Sonia Jeannete Sánchez Pérez, an acclaimed women human rights defender in the municipality of Santo Tomás, is well-known for protecting the natural resources of the El Porvenir forest, identified as an area where watersheds are replenished. Since March of 2015, she has waged a constant struggle in defense of the territory and environmental resources threatened by Inversiones Roble’s urban development project, “Brisas de Santo Tomás”.

In the context of this struggle, Inversiones Roble filed a complaint against her on September 29, 2015, for the offenses of DEFAMATION and SLANDER in statements she made on three television stations (Channel 33, Channel10 and TVX) and on National Radio regarding the damage that this company has done to the environment. She also stated that the permission granted by the Ministry of the Environment and Natural Resources, for initiating the construction of the “Brisas de Santo Tomás” urban development project has expired, given that it was issued in March 2009 for a period of one year. Furthermore Sonia Sánchez publicly denounced the threats she has received from the private security forces of the Brisas de Santo Tomas Residential Development.

In its judgment, the Court of First Instance, presided over by Judge Anne Magareth Castro, decided not to admit the private complaint due to the fact that it did not comply with the requirements of prosecution, ignoring the right to petition prior to filing the private complaint for DEFAMATION and SLANDER. In December of 2015, the First Instance Criminal Court of San Salvador decided to revoke the judge’s decision and returned the case to the Court of First Instance to continue with the legal process. Months later, in view of the failure of the attorneys representing the legal interests of INVERSIONES ROBLE S.A. de C.V. to attend the Conciliation Hearing, the Judge decided to dismiss the private allegations and ordered the acquittal of Sonia Jeanette Sánchez Pérez. The lawyers representing the company appealed her decision in the Criminal Court, which revoked the acquittal and once again sent the case back to the lower court to continue the prosecution.

Finally, on Friday, August 19, a sentencing hearing was held, not before Judge Anne Margareth Castro, but before a Substitute Judge, who after almost 12 hours of work, decided to issue a ruling on the sentence on Tuesday, August 23. On that date, the judge issued a verdict acquitting Sonia Sánchez, given the failure of the prosecution to prove that the defendant showed intent to damage the honor and intimacy of the company and its legal representative, and that accordingly, the behavior of Sonia Sánchez did not meet the criminality requirement regarding the conduct of which she is accused, and a subjective motive for the commission of the crime did not exist.

We, of IM-Defensoras believe that this acquittal should serve as a model case regarding the criminalization of the defense of human rights in the region. It sets a legal precedent that is extremely significant for the entire region, and for this reason we believe that it is essential to disseminate it as widely as possible and insist that it be regarded as case law by officials of the legal systems in our countries, as well as by national and international human rights organizations and agencies. This is especially important in a regional context in which the criminalization and prosecution of women human rights defenders are a recurrent strategy by governments and businesses for the purpose of limiting and inhibiting their work, We are aware of the deep affectations that such processes represent, both for the exercise of the right to defend rights, and for the integrity of human rights defenders, especially for women, and we are also aware of the demobilizing effect that they exert on the rest of the society.

For all of the above, we of IM-Defensoras: