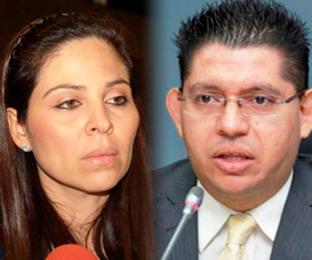 Bertha de León is a human rights lawyer who, up until March of this year, worked for the Foundation for the Study and Application of Law (FESPAD). Bertha has been involved in several high profile cases, including a lawsuit for embezzlement, illicit enrichment and disobedience against the former President of El Salvador, Francisco Guillermo Flores Pérez.

Pedro José Cruz is a human rights lawyer and President of the Salvadoran Human Rights Association (ASDEHU), an organization that provides legal accompaniment to victims of human rights violations.

On June 2, 2016, Pedro José Cruz and Bertha de León were meeting with a journalist when they realized they were being followed and that their conversation was being recorded by an unidentified man.

On June 8, 2016 2016, the two defenders were the target pf surveillance by unidentified men who were following them outside the Criminal Courthouse in San Salvador, where they are representing several clients in corruption cases against businessman Enrique Rais López. That same day Rais López’s lawyer had filed a defamation suit against both defenders.

These incidents are only the most recent in a string of acts involving intimidation and harassment against the lawyers.

The human rights defenders are representing the couple Mario Calderón and Claudia Herrera, who have several lawsuits pending against Enrique Rais. The couple’s former lawyer, René Medrano, resigned after suffering judicial harrassment, detention for three days, and the ransacking of his office by unknown persons in 2015. Medrano has left the country with his family due to threats he received.

The Salvadoran Network of Women Human Rights Defenders demands an immediate, thorough and impartial investigation into the acts of intimidation against Pedro José Cruz and Bertha de León, as well as the adoption of all necessary measures to guarantee the physical and psychological integrity of both human rights defenders.