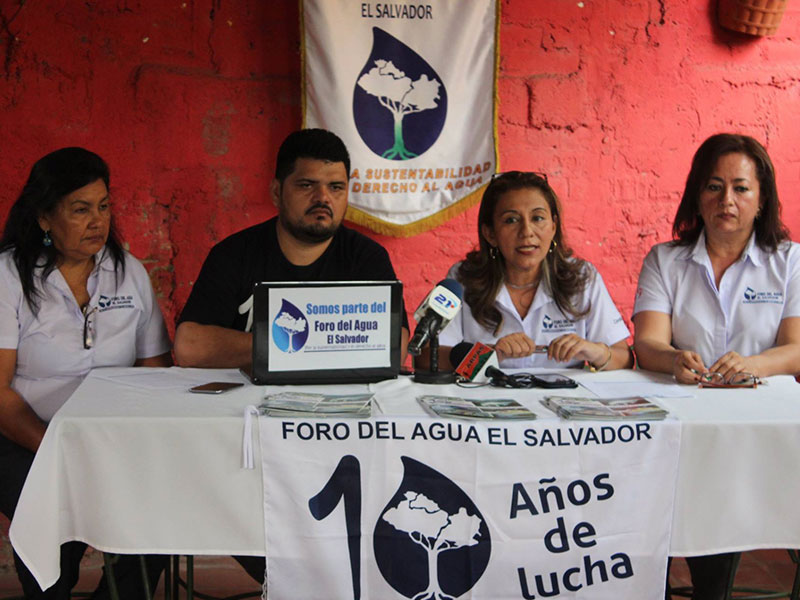 Mesoamerica, June 20, 2016 – The 750 women human rights defenders of El Salvador, Guatemala, Honduras, Mexico and Nicaragua who make up the Mesoamerican Initiative of Women Human Rights Defenders (IM-Defensoras) express our concern over the security situation of wáter rights defenders representing community water systems in the town of Puerto de La Libertad- These defenders were granted protective precautionary measures on April 14 by the Office of the Ombudsman for Human Rights (PDDH) of El Salvador.

Since March 2015, members of the executive boards of the water systems of Canjera Centro, ASCOPBASCO, Hacienda San Diego and the community organization United for Water and Agriculture (ACUA) have been subjected to a series of attacks due to their work in defense of the right to community access to wáter. This work includes the generation of systems constructed and managed by the communities themselves.

The attacks faced by these groups of defenders include:

2. Smear campaigns against executive board members accused of the embezzlement of public funds and, recently, the murder of an employee of the Mayor’s office on May 6, 2016.

3. Direct and indirect threats and verbal attacks against community water rights defenders, even at public events.

IM-Defensoras underscores the importance of the fact that half of the defenders awarded PDDH precautionary measures are women. This reflects the empowerment of women with regards to water access and management, which in turn has profound gender implications, as recognized by the UN:

<<The importance of involving both men and women in water management and sanitation has been acknowledged at all stages, beginning with the UN Water Conference in Mar del Plata in 1977, followed by the International Drinking Water Supply and Sanitation Decade (1981-1990) and the International Conference on Water and the Environment in Dublin, in January of 1992, where acknowledgement was extended to the key role of women in the supply, management and protection of water. This point is again underscored in Agenda 21 (chapter 18) and in the Johannesburg Implementation Plan . Moreover, the declaration of the International Decade for Action, “Water for Life” 2005-2015, calls for the participation and involvement of women in water development initiatives.>> UN, International Decade for Action “Water for Life” 2005-2015.

In this regard, the attacks on wáter rights defenders not only imply an attack on community rights to the management of water resources, but also have an impact and pose a risk to the participation of women in water management, which as noted by the UN, is key to the advancement of gender equality in the communities.

For these reasons, we, the members of IM-Defensoras consider it highly important to publicly express our recognition and absolute support for the work of women wáter rights defenders in Puerto de la Libertad, which not only benefits the communities, but also sets an example for the progress and empowerment of Mesoamerican women.

-We condemn the use of power, excessive force, smear campaigns and attacks commtted by the Mayor of Puerto de La Libertad, Miguel Angel Jímenez, and by other municipal personnel against defenders of the human right to water.

-We demand that government authorities in El Salvador guarantee compliance with precautionary measures granted by the Office of the Ombudsman, holding it responsable for any further attack that might occur.

-We demand that the government of El Salvador acknowledge and foster the essential work of women water rights defenders in keeping with UN recommendations for gender equality.

And finally, we call on regional and international organizations and entities to stay abreast of the situation and extend your support and solidarity to water rights defenders in Puerto de La Libertad.